Bohemia: Which estate is the right one?

One of the common questions about the Czech genealogy, history, serfdom etc. is: which estate is the right one? To which estate did my ancestors belong? The answer for Bohemia is quite easy: look into a book called Popis králowstwí Českého (Description of the Czech Kingdom) which was written by František Palacký in 1848. The book is available online on Google Books. 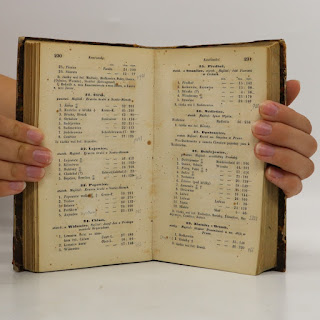 Popis králowstwí Českého - original book from 1848. Source: Knihobot.cz.
This book covers all of the towns and villages in the former Czech Kingdom (ie. Bohemia only, not Moravia or Silesia) - all of them are written down by the estate to which they belonged. The division is easy: region - estate - town/village. You can use an alphabetical index at the end of the book to find the place you are looking for. 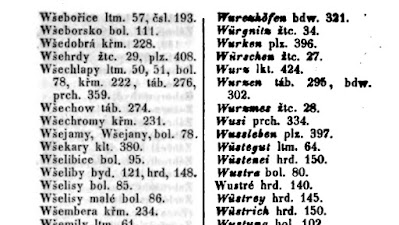 Index of the book.
The index shows a name of the town, abbreviation of the region and a page of the book where you can find more information about the town. For example Wšelibice (today Všelibice - don't forget V and W are interchangeable) was in (Mladá) Boleslav region and can be found on page 95. There are more towns with the name Všechlapy - one in Litoměřice region, one in Boleslav region, another in Kouřim, Tábor and Prácheň region.
Abbreviations of different regions:

When you find your town in the index you can then easily find it in the book itself. Let's check for Všelibice: 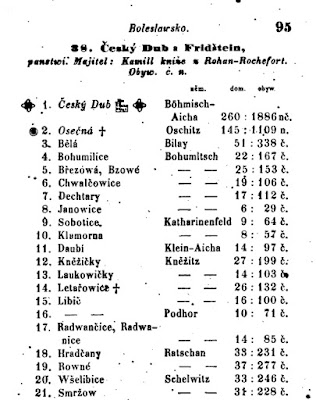 Všelibice is located on page 95 and you can find it in Mladá Boleslav region (Boleslawsko in the top of the page). It belonged to the Český Dub and Fridštein estate which was owned (Majitel) by Kamill, kníže z Rohan-Rochefort (Kamil, Prince of Rohan-Rochefort).

The first column shows a number of the town at the estate, second column shows Czech name, third is German name, fourth is number of houses in the town, number of inhabitants can be found in the fifth column and last column shows if the inhabitants are speaking Czech or German (č./n.). Všelibice was no. 20, its German name was Schelwitz, there were 33 houses and 246 Czech speaking inhabitants in the town in 1848.
This is the easiest way how to find out the estate to which your ancestors belonged. Remember - this is for Bohemia only. Moravia and Silesia needs another approach. I'll write more about it in few days.
By Blanka L. - October 23, 2021