You have most probably seen such notes in the parish books - cause of death and then a number of a death survey card. 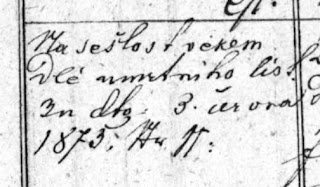 These survey cards were issued for every cause of death since the first half of 19th century - exact date when they were mentioned in the parish books is different for each parish office, but we can see such notes in almost all of them after 1840.

What was written in these survey cards?

Some of those cards were left in the Southern Bohemian parish books and then scanned when the parish books were scanned. Here is one of such cards from 1862: 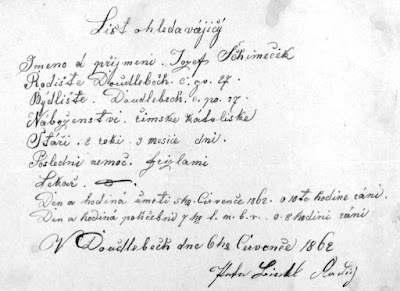 As you can see there is quite a lot of information which is then written to the parish book. There was no medical doctor called for the child - as measles belonged to the most common causes of death of small children the doctor, which was quite expensive, was not usually called in such cases.

Do you like our posts? Consider becoming our patron on Patreon and support us by regular monthly contribution. We offer three tiers with different advantages. See more on Patreon: https://www.patreon.com/czechgenealogy