Surnames reffering to the physical appearance

Last month poll decided that this month I'll write about those surnames which reffer to the physical appearance of the first person who got that surname. So - what kind of surnames we can find in this "category"? 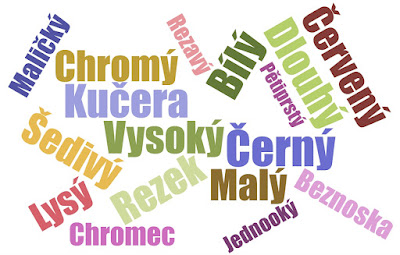 There are surnames which mention something what was typical for that person. It could be hair, physical feature or anything else. One of the most common Czech surnames is Kučera - which reffers to hair. Kučera means a lock of hair, so the first Kučera was someone who had curly hair. If someone had a lot of hair, his surname might be Vlasatý (meaning hairy). On the other hand, someone with no hair was called Lysý.

Anothere surname of that type could be Silný - it has two different meanings, strong or obese. But if one was obese, he was most probably called Tlustý (exact meaning is fat as adjective). Someone who was tall was named Vysoký. Someone small was Malý. If someone was really thin, he was called Hubený.

There is number of such surnames and those listed here are just examples. Sometimes you need to know Czech very well to be able to decide if your surname falls to this category...

Do you want to choose what will be the next surname post about? Become our patron on Patreon and vote in the next month poll!