As I promised before, I prepared a blog post about marriage notes in Czech language which you can find in the marriage registries. Notes mentioned in this article were taken from the marriage book in Horní Záhoří parish, one of my most favorite parishes. Believe me - there is much interesting information included in these notes, so they are worth reading. 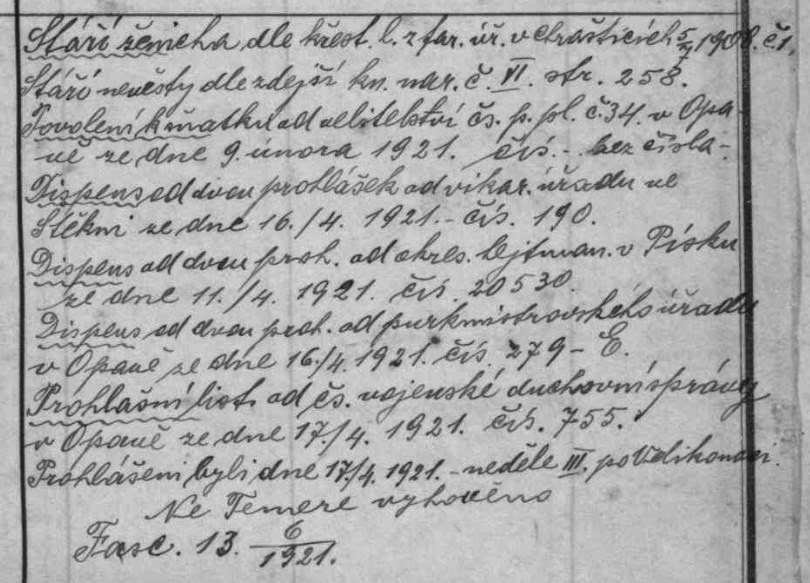 Transcription of the notes:

Translation of the notes:

So, quite many notes, right? We already had some similar to them in German version of the marriage note, but let's take a look on those which are mentioned here.

Age of groom and bride
First two notes are focused on the age of bethroted. Groom was born in another parish so he had to bring birth certificate to prove who he was and that he was old enough to marry. Birth certificates were issued ad hoc, people didn't receive them automatically when they were born. If they needed them (because of marriage, military service, some other reason) they just asked for on in the parish where they were born.

Bride was born in the parish where she married so her age was easily confirmed by local parish book. The advantage is clear - when you combine information about age and parish book, you directly know in which registry you should search for bride's birth record.

Marriage license from the military headquarters
This tells us that the groom was in active military service. We find out where he served - in the 34th field regiment of Czechoslovak army located in Opava. Quite far away from Horní Záhoří where the marriage took place. But his parents were living in Vrcovice, small village located in Horní Záhoří parish.

Every soldier needed a marriage license. These licenses originally (during the Hapsburg monarchy) ensured that the soldier is able to feed the family (not all ranks were able to do so as they had little money). Later it became a form of securing the military positions - not all soldiers were allowed to marry as it would distract them from the service.

Dispensations from marriage bans
There are three of them, because every kind of administration had to agree. One dispensation is from the vicarage office where the groom and bride belonged, another from the official Czechoslovak administration, third from the military church administration where groom was obliged to serve.

Marriage bans
There were usually triple marriage bans held to ensure that the bethroted are allowed to marry (people had possibility to come to the parish office and say why they think the couple should not marry - there were clearly stated reasons such as close blood relationship etc.). It was possible to ask for single marriage ban in case the marriage was in a hurry - such as if the bride was pregnant.

There was only one term of the marriage bans in this case - during the public mass on third Sunday after Easter. Church dating is used as well as "normal" date shown - 17th April 1921.

Ne Temere certificate
Ne Temere means "do not foget" in Latin. It was a short note about the fact that the marriage took place which was sent to proper offices - parish where the groom was born (and the vicar there probably wrote a short note to the birth record about the marriage).

Email ThisBlogThis!Share to TwitterShare to FacebookShare to Pinterest
Labels: registries