Many people have the education system connected to the person of Empress Marie Terezie who reigned between 1740 and 1780. She was the one to set up the system as we know it today - the mandatory school attendance etc. But schools were much older than that. First of them which were founded in the early medieval ages were focused mainly on education of future priests and monks. Schools were founded in the monasteries or by large parishes but only the rich could afford them those days. Common people received no basic education as reading or math skills, they just somehow learnt what they needed in daily life. 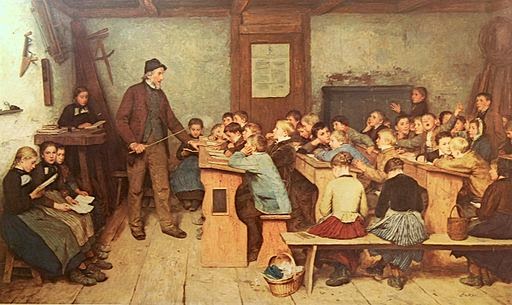 
This began to change in 18th century when schools were founded even in smaller parishes - but still schools were affordable only for those of higher rural classes and to boys only. This was still valid in the times of Marie Terezie and it was one of the reasons why she decided to change the system and provide the basic education to everyone.

Marie Terezie issued an act in 1774 (General school regulations) which set up mandatory school attendance for all children between 6 and 12 years of age (yes, even the girls). Schools had to be founded in all parish villages and "trivium" (reading, writing and simple math) had to be taught in these schools. These parish schools had often just one class where all children from the parish should be present - as you see in the picture above, it could have been quite crowdy.

Wages of the teachers were responsibility of the domain owners who moved it to the responsibility of parents - certain payments, in cash and/or in perquisite as kolache, bread, corn, apples, milk, eggs etc., had to be done regularly. This of course caused many problems and teachers had quite a hard life. If there is English translation of Karel Václav Rais' book Lost Patriots (or Neglected Patriots and I have seen several other names, but "patriots" is always there) available in your library you can read about this not-so-easy life.

Not all families sent all their children to school - child labour was very important for them, from collecting fruits to watching goats or ducks. There were almost no children present in the school during the spring and autumn period as most of them were helping their parents on fields.

This was valid until 1869 when new school regulations came in place. Mandatory school attendance was prolonged to eight years and there were more subject taught - basics of biology, geography, history. Teachers became state employees and they were paid by the area council. Every school had its own council which provided equipment and any aid needed.

Czechoslovakia which was founded in 1918 decided to adopt this school system. Pupils were taught in their native language (Czech, German, Slovak, Polish or Hungarian) and there were more subjects included in the curriculum - such as arts, music, modern languages etc. Current school system is still based on these roots given by the Empress more than 2 centuries ago...
By Blanka L. - October 01, 2014