Well, well, well. You already bumped into them, right? Mistakes, mistakes, mistakes. Wrong names, wrong surnames, wrong places, wrong age, wrong anything. I already wrote a blog post about age, but let's take a look on those other incorrections. This post is more or less valid for whole Europe, not only Czech parish books as we all are just humans and we make mistakes.

Wrong names
Example no. 1: Jan Hnízdil had six children. They were all born in Lhota house no. 21 between 1805 and 1820. Four of the children have mother Marie born Kadeřávek, two have Magdalena born Kadeřávek.
Well, this is generally not a mistake. Full name of Marie Kadeřávek was most probably Marie Magdalena Kadeřávek. Marie and Magdalena are interchangeable names and first or second or both can be used. So this is not a mistake.

Wrong surnames
Similar to the previous case. It becomes much more complicated if surnames "after the roof" are used. It's important to remember that the priests wrote down the information family gave them. And the family often didn't remember well, or they mismatched some surnames across generations and so on, and so on. 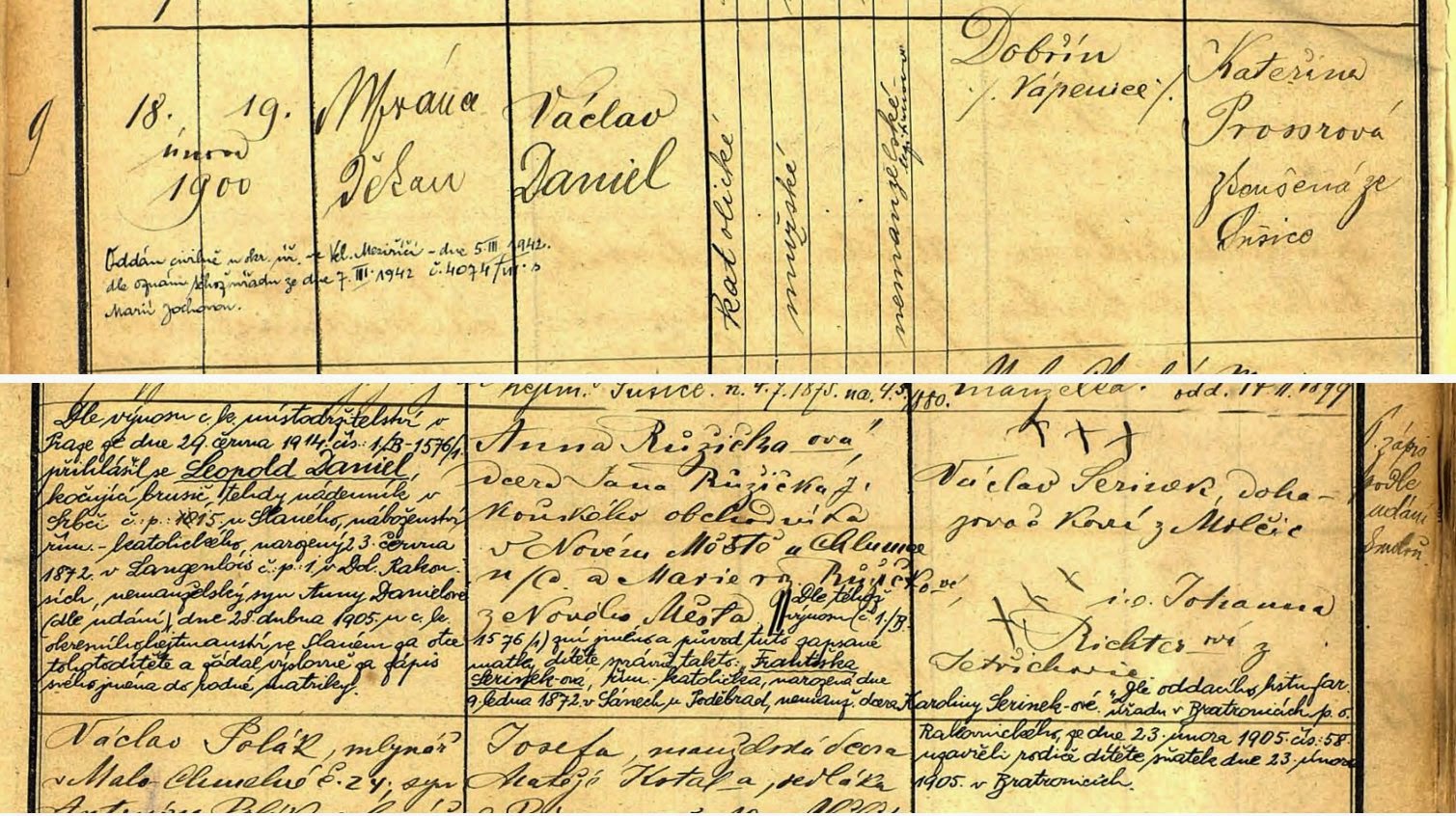 Not even mother is sometimes written down correctly. This one shows a case where information about mother of illegitimate child was complete nonsense. Well, what to say? Luck is your only chance in such cases...

Wrong places
Example no. 1: Josef Šára is recorded as son of Martin Šára, hind from Smilovice, and Dorota Brázdová from Podveky in three birth records of his children, but two other records show him as son of Martin Šára, house renter from Úžice, and Dorota Brázdová from Podveky.
If you take a look on map, you'll notice Smilovice and Úžice are near to each other. Martin could rent a house in Úžice when he became older and therefor he moved there. So the place is not wrong in fact but if you looked only for one of those two younger children of Josef, you'll have information about Úžice only - and you won't be able to find Josef's birth there as his father lived in Smilovice before he moved to Úžice. Sounds a bit complicated, but it's not so bad... :)

Example no. 2: Paul Klein's birth place is shown as Chyše in Prague inhabitants lists and also in the Prague parish books. But when you try to search Chyše books, he is not there. Prague police conscriptions show the birth place as Patstiebel, but there is no such village in Bohemia.
Now this one could be really complicated to someone who is new to the research. One birthplace is incorrect, another hard to find. But when you take a look on old map of Chyše surroundings, you'll see a village called Badstübl there. And Badstübl and Patstiebel have very similar pronounciation. And yes - if you check the birth registry, he's there...

There are many other things which could be wrong. And the only way how to find out correct information is to dig deeper to the history. Good luck to all of you in your research!
By Blanka L. - March 17, 2015