Houses of our ancestors, part I. - farm houses

I received some comments mentioning ancestors of those who wrote them didn't live in small houses, they lived in farm houses, so what I presented was quite extreme case. Well, it wasn't. There are two different things - large (farm) house and large area for living. Do you think that if the house was large, the living area was also large? Really? Let's take a look on some examples.

Farm houses
Those were the largest houses in Czech villages. Often quite impressive buildings with many outbuildings, storage rooms and sheds. But what was inside? Was the living area large? Well - no. 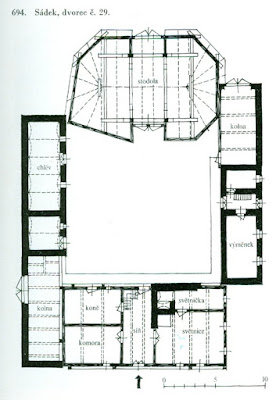 
As you can see, from whole huge house only four rooms are intended for living - světnice, světnička, komora and výměnek. And two families lived there - farmer's family and retired farmer's family. But - what about hinds, grooms and other personel? Well, they lived in the farm house too, usually sleeping in hayloft or in komora during the winter. 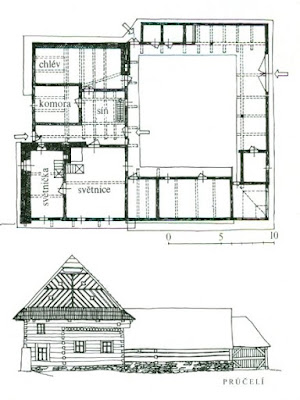 Another great example of a house looking large from outside, but in fact small inside. Most of the space were outbuildings and sheds/stables. 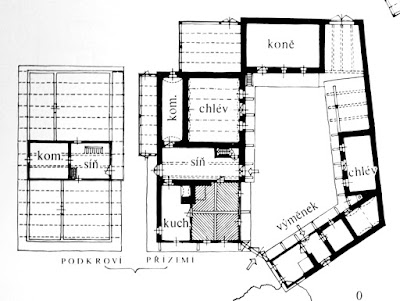 Another farm house shows not only groung floor, bu also  first floor. But asi you can see, there is not too much space either. There is special part of house for the retired parents of the farmer in the right side of the farmhouse, but it's again only small hall and one room - the rest are sheds and stables. 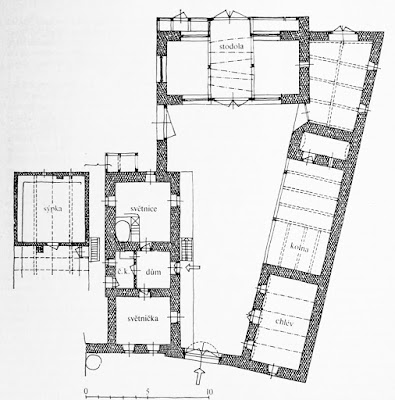 Again huge house - but small living space, but fairly larger than in previous cases - not only one living/bedroom, but two of them. But there is no special room for retired parents who most probably lived together with the family which, of course, made the space smaller...

I think these houses show that not even farm houses were large in the way how we understand the term "large house". I'll prepare another blog posts - one showing cottages and small houses, another showing town houses.