Houses of our ancestors, part II. - cottages and small houses 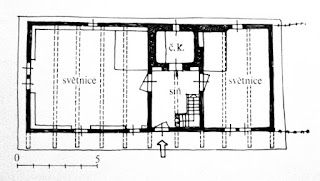 Cottage with two bedrooms - often shared by two families, cottager's family and another family renting a room. These renters were often craftsmen who worked in the same room where they lived. Cottager's family lived in larger bedroom and kitchen was shared by both families. There were sheds outside the building for cows, pigs or goats as well as small outbuildings.

Two village houses (these examples were taken from Slovakian area but the same houses were also in Bohemia, I jus wasn't able to find plans) with one bedroom with open kitchen, hall and storage room. The second one also has a cow shed accessible from the hall, which meant smaller loses of warm during winter. But the odour... Well, I leave it to your imagination. :)

Many houses had just one small room, nothing more. Families of hinds, house renters, craftsmen lived in such houses. And those houses were really really small (12 to 14 square meters) - such as the one on a photo below which is located in open air museum in Veselý kopec. 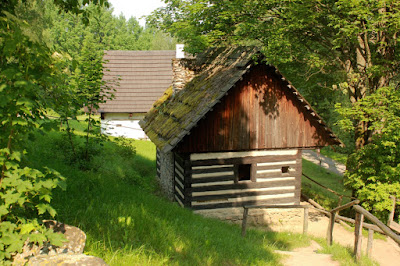 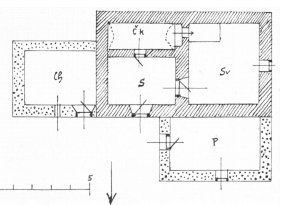 
Last one is a plan of poorhouse. It was a building administered by the municipality to provide sleeping room for poor people who were not able to support themselves. Often three or four families lived in such houses, while every family had one corner of the "living" room.
By Blanka L. - October 28, 2015