All (well, almost) you always wanted to know about districts in Bohemia, Moravia and Silesia. Or at least those important bits which could make your research a bit easier. Not much, but at least a bit. The districts as we know them were created in the middle of 19th century, during huge administrative reform initiated by the Emperor František Josef I. Czech lands were divided into several regions and number of domains before this reform.

Situation before 1850
Bohemia, Moravia and Silesia were divided into 24 regions - 16 of them in Bohemia, 6 in Moravia and 2 in Silesia. These regions are not often mentioned in the parish books, more often there is mentioned to which domain people belonged as serfs. 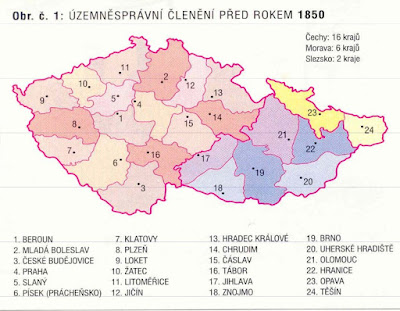 For example berní rula, first Bohemian (not Moravian or Silesian) list of householders from the second half of 17th century, is based on this regional division. 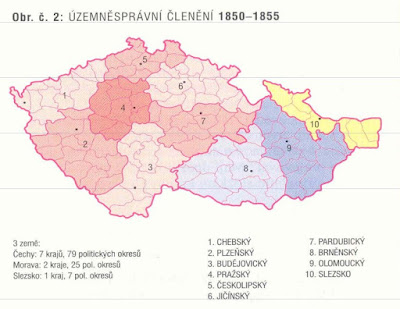 Situation 1855 to 1868
This division was waaaaay too complicated. So it was decided in 1855 to integrate the court and political districts into one district office. This meant also integrating both judicial and political power which never works too well. Anyway this division was in place for 13 years before it was decided another change is needed to be done and that those two powers have to be divided. 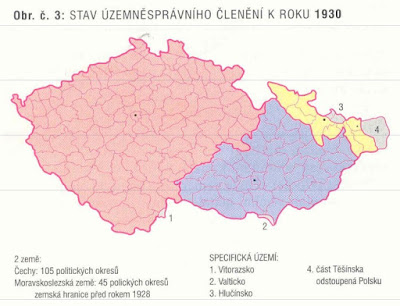 This division was in place till 1949 when modern regions and districts were created.

Sources to use
Pěnkava and Kraus genealogy website
Seznam míst v Království českém - huge book covering all places (even hamlets) in Bohemia. Available in PDF from Google Books or in Kramerius of Czech National Library.
Geography lecture from Olomouc university (PDF, in Czech)