I have already written a blog post about Christmas traditions, but what about those welcoming new year? What customs were connected to new year in Czech past? There were many of them and I have selected only some of them. I have used wonderful book Veselé chvíle lidu českého written by Čeněk Zíbrt - there are many of those new year's customs mentioned in this book. 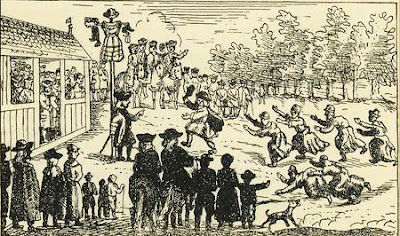 
It was very common to celebrate new year with noise, fun, jokes etc. - and it was also criticized by the church because many of those jokes were based on church customs, sermons and so on. Singing, ringing of church bells - it was also part of midnight celebration.

There was quite strange form of celebration in Silesia - women raced in New Year's Run for a fur-coat, shoes or hat (see picture above). The one which won got the coat, second one got hat etc.

Our ancestors were used to give gifts to his family and friends, and also to poor people. Carolling was part of new year's celebrations - poor people were going around the village or town, singing and carolling. They usually received something to eat - apples, nuts, bread, cabbage, also wheat or corn, potatoes... It was form of charity, one of ways how to ensure the poor won't die of starving.

Another form of carolling were walks with fanfrnoch. I tried to find a translation for this word but it's better to post a link to a video... :) People walked around the village with this "music" instrument, sang and carolled.

There also was number of strange characters connected to the last day of old year and the first day of new year. One of them was "mad hag" who was common in White Carpathians, around Hrozenkov. She was never seen, but all families prepared cake, bread, salt and water for her so she wasn't mad at them.

Two old hags were "carolling" around villages in Central Bohemia - children, mainly girls, were afraid of them, because when the hags appeared, they were screaming "give us cake or your girls"! The hags were carrying goose's wing covered in tar and if the housewife who was giving them cake wasn't quick enough, they smeared her face or hands with the tar.

We have a saying in Czech "jak na Nový rok, tak po celý rok" which has no English equivalent. It could be translated as "The way you are on New Year's day - that is the way you tend to be all the rest of the year long." There are many superstitions connected to the New Year's day:
So... Happy New Year 2017!
By Blanka L. - December 31, 2016