I was asked several times what everyday life in the 18th century was like. So, here is a very brief post about the farmer's life in 18th and 19th century.

It was in fact very similar to current life in rural areas, every day almost the same as another. The only difference was made by changing the seasons - life during the winter was much slower than in the spring and summer. 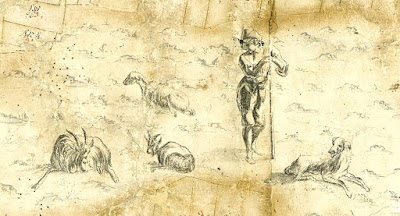 Shepherd, 1st half of the 18th century.

The day usually began at about 6 AM (or earlier during the summer, as soon as the sun was up) - animals prior to people, so first of all feeding of the animals, milking cows, letting chickens, geese and ducks out of the poultry-house, checking if all the animals are ok.

Then followed a breakfast, usually some mash or porridge, salty or sweet, sometimes bread with a piece of cheese, butter or plum jam, milk, water, watered beer, herbal tea. The breakfast was a basis for whole day because our ancestors very often ate just in the morning and then in the late afternoon. 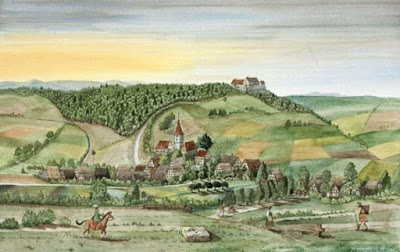 Village in the 18th century.

Men usually went to work on fields after the breakfast - it depended on the part of the year, they spent there most of the spring, summer and autumn, sowing and gathering crops, taking care for the soil (fertilizing, plowing etc.). They worked not only on their own fields, but also on estate fields, often two or three days of the week as "robota", mandatory labour for the estate owners, was in place. This consumed most of their time and complicated work on their own fields.

Women spent most of their time around the household - taking care of children, garden and house, washing, repairing or sewing clothes, cooking, baking - some of these tasks were done only once a week with more families cooperating, e.g. baking bread. They helped during the harvest, but they were also collecting wild berries and other gifts of nature (such as mushrooms, herbs etc.). Women worked a lot at their garden - growing vegetables such as onion, garlic, beans or peas, taking care for fruit trees and bushes, processing the fruits and herbs (making jams, drying, conserving)...

After the work on the fields there was work which was needed to be done around the house - repair anything what was broken (and there was always something to be repaired), prepare wood for winter, take care for the cattle.

Evenings were often quiet, spent in finishing house work and relaxing, talking and telling family stories or fairy-tales. As there lived more generations together there was always someone who had another story to tell, another tale about his or her life. Neighbours met in a pub from time to time (well, sometimes daily :)) and shared news they heard about the life outside the village. 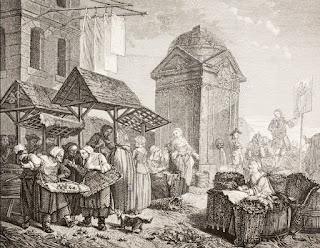 There were weekly markets held in larger towns and villages and selling or buying goods in such markets was a bit of change in the everyday life. Family had to pack the goods they wanted to sell (eggs, grain, fruits...) and walk to the market town/village. They usually spent whole day there as it was a chance to get news, enjoy themselves, talk to the relatives who lived in different town or village and so on.
By Blanka L. - July 15, 2018