Czechoslovakia existed long enough to experience Nazi "protectorate" between 1939 and 1945 and then Communist rule between 1948 and 1989. People of our country lost freedom for so many times they have problems living in a free country today - that's why there are so strong tendencies towars Russia... The country doesn't exist anymore - it lost Subcarpathian Ruthenia in 1938/1939, the country was divided in two (Czech Republic and Slovakia) at the end of 1992.

Czechoslovakia had nine presidents - Tomáš Garrigue Masaryk, Edvard Beneš, Emil Hácha, Klement Gottwald, Antonín Zápotocký, Antonín Novotný, Ludvík Svoboda, Gustáv Husák and Václav Havel. Some of them were great statesmen, some of them not so much. The country lived through better and worse times in its 75 years long history (1918-1993).

I was born in Czechoslovakia. It ended when I was 12 years old. I still understand Slovak language (but younger generation already has problems to understand). Czech Republic still uses original Czechoslovak flag as its own. 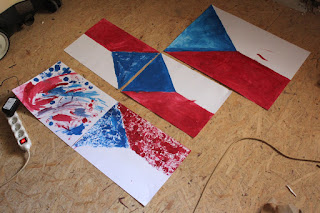 There are celebrations of this 100 years old lady running all around the country. Exhibitions, movies, theatres, museums, happenings... And I'm happy I live here, in the heart of Europe. Even the fact our current political representation is far away from "great people". Even the fact there is "bad mood" in the country. The country itself is wonderful. And it has (we have) very rich history (ok, even there are quite many fleas, but which country doesn't have them? :) )

Most people who immigrated to the U.S., Canada and other countries, left Czech lands before Czechoslovakia was created. Maybe, if they lived here long enough to experience the creation of this country, they wouldn't leave. The atmosphere of the new-born state was totally different from the old Habsburg monarchy. And people were proud about Czechoslovakia...