German-speaking inhabitants of the Czech lands

I found an interesting map of the percentage of native German speaking inhabitants in the court districts of the Czech lands before the WWII. It shows the density of the German speaking population in the border area - Czechoslovakia was forced to give up these parts of the country to Germany in the Munich agreement of 1938. 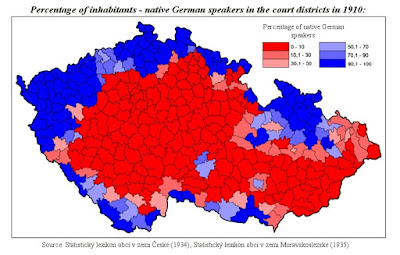 You can see the language islands around Jihlava or in Hřebeč area. And also in Brno where was really strong German population.

German speaking people started to come to the Czech lands during 12th and 13th centuries. They  brought with them their specialization and crafts knowledge. They often settled in the mountain areas - they were glassmakers, miners, blacksmiths, weavers, but also farmers.

I also have German speaking ancestors. They were from Jindřichův Hradec area, from the towns Člunek (Hosterschlag) and Lomy (Tieberschlag). My husband has German speaking ancestors from Bílina area in Western Bohemia, one of them later was in the financial guard (customs office) in Krkonoše area. All of these people later married to Czech speaking areas and in one or two generations they spoke Czech.
By Blanka L. - April 10, 2020