What does 2nd or 3rd degree of relationship mean?

When you are researching your family history, one of the thing you can notice in the marriage notes are dispensations (permissions) to marry because of 2nd, 3rd or 4th degree of relationship. Well, we can translate that one quite easily - but what does it in fact mean?


There are two types of relationship - by blood (consanguinity) and by marriage. Some of the law systems (such as Catholic church law) have a rule that you are not allowed to marry your close relatives. It's originally more a property concept than a health one, but it was known since ancient ages that if you marry close relative there was quite high probability the children will have health (or mental) issues.

So there were rules in place which set who you were allowed to marry. And there was created a chart of blood relationship degrees to show when you needed a permission from the church. And back in 1700s one of the Kmetiněves priests draw this wonderful table to make it clear: 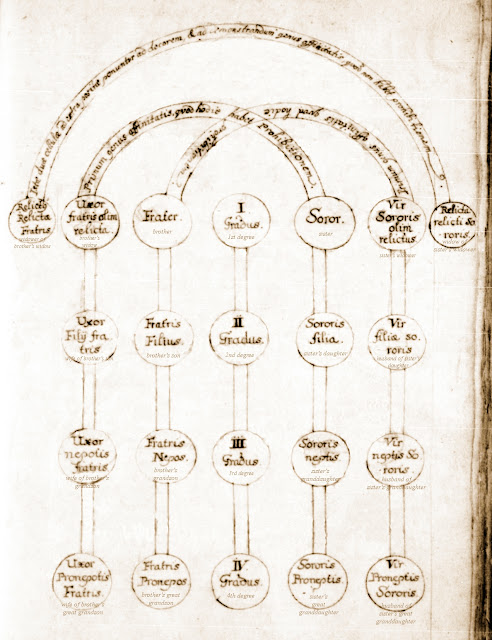 Second grade of consanguinity are first cousins. They were allowed to marry - but they had to ask for papal dispensation. And it was given only in specific cases - such as if the bride was pregnant.

Third grade are second cousins (one of the great-grandparents is the same for both). If they wanted to marry they needed arch-bishop's permission.

Fourth grade are third cousins (one of the great-great-grandparents is the same). They needed "just" bishop's permission.

Third and fourth grade marriages were quite common - it was almost impossible to find someone not related in those areas which were geographically distant from other places (such as towns in mountain valleys etc.).

And what if the uncle wanted to marry his niece? Then the "shorter" relationship to the joint ancestor was counted - it was considered as if they were siblings, but they were allowed to ask for papal permission to marriage.