Opava archives (which cover central and northern Moravia and Silesia) contain quite much information. Such as... Tons of different archival sources, not only parish books or census records, but much more. One of those sources are card indexes - or registration cards of the people who lived or moved in the town. You can find similar resource in the Prague municipal archive - Prague conscriptions. 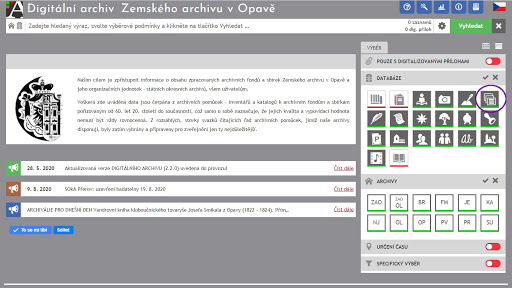 These registration cards usually dates to the first half of 20th century. Every larger town had its police department which registered people coming to town. Everyone who stayed one night and more was supposed to be registered to have an overall picture about people living and working there.
So, what do these cards contain?
You can find there quite a lot of information about people. The registration card was used also as an identification card before the ID cards became part of our lives. I chose one card written in Czech as an example - there are also many cards written in German as they were part of the Protectorate system during the WWII. 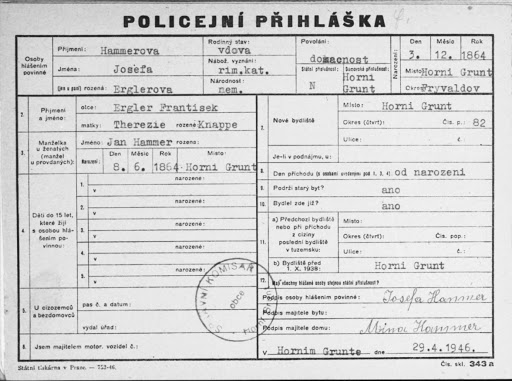 This is a registration card of Josefa Hammerová from the Jeseník (Frývaldov) district, from town Horní Grunt (today Horní Údolí, part of Zlaté Hory). It shows quite many information about her - name, surname, maiden name, marital status, religion, nationality... Let's take a closer look.

This is the first "identification" part. It contains surname (příjmení), names (jména), maiden name (rozená), marital status (rodinný stav), religion (nábož. vyznání), nationality (národnost), occupation (povolání), country of residency (státní příslušnost), domicile rights (domovská příslušnost), day, month, year, place and district of birth (narození - den, měsíc, rok, místo, okres).
So Josefa Hammerová was born Erglerová, she was a widow (vdova), of Roman catholic religion and of German (nem.) nationality. She was in household (domácnost), resident of Germany (N) with domicile rights in Horní Grunt - she most probably belonged among those Germans who were expelled from Czechoslovakia after WWII (that's why she had residency in Germany) but was allowed to stay in CZ. She was born on 3rd December 1864 in Horní Grunt in Frývaldov (Jeseník) district.
What else is there... 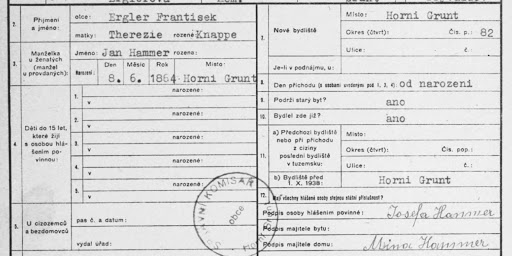 There is information about Josefa's parents - father (otec) Ergler František, mother (matka) Therezie Knappe. There is also name of her husband (manžel) Jan Hammer who was born on 8th June 1864 in Horní Grunt. If she was younger there would be children up to 15 years mentioned (děti do 15 let).
The card mentions Josefa's new residency (nové bydliště) - Horní Grunt house no. (čís. p.) 82. It also lists the day she came to town (den příchodu) - she lived there since she was born (od narození). It lists her residency prior to 1938 - Horní Grunt. Josefa undersigned the registration card together with the house owner - Mina Hammer, most probably her unmarried daughter.
Quite a lot of information for one card, right? And the important part is - thanks to these cards you can track people who were born in the first half of 20th century, sometimes even those who are still alive.
Posted by Blanka L. at 10:50 PM