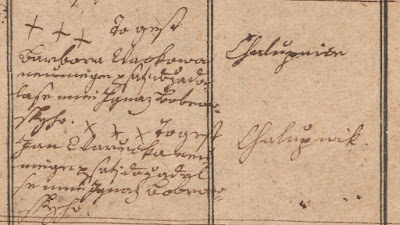 Those three crosses are here instead of the name. They were written by a person who didn't know how to write his/her name. The name was then written by someone educated, usually a priest or a teacher, who is usally mentioned as "Jména podpisatel" (name writer) or somehow similarly.

You can find three crosses instead of a signature for quite a long time, until the second half of 19th century - and sometimes this sign is used even nowadays because there are still people who are not able to write.

This comes from the Christian tradition as the cross was (and still is) the most important sign and also one of the easiest pictures to write/draw. It was called a hand sign meaning that it was written by the person whose name was written next to this sign.