When the baptism took place?

Do you like our posts? Consider becoming a patron on Patreon. We offer three tiers with different advantages. See more on Patreon: https://www.patreon.com/czechgenealogy

When our ancestors were born one of the first things awaiting them was the baptism. It was one of the most important events of their lives - at least from the church point of view. 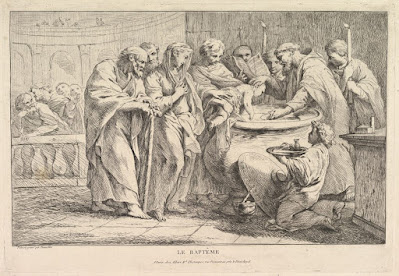 And when I say "as soon as possible" I really mean it. Until the second half of the 19th century the child was fed by his/her mother, washed a bit, dressed in a shirt, wrapped in a scarf and/or a blanket and the godmother took him/her in the church usually just a few hours after the birth.

Usually it was just a few hours but there were cases when it took even two three days to baptise a child. It was a case of heavy snowfall or some other natural events which prevented our ancestors to visit the church - and it was much easier to wait until the conditions were better.

The time between the birth and the baptism prolonged as the medical care improved and less and less children died shortly after the birth. It was common at the end of 19th century that there was a two days gap. And in the first quarter of the 20th century it prolonged to two or more weeks.