Surname changes shown on one surname

March poll about surnames on Patreon was won by an option to show surname changes on one surname. I have chosen surname Švejda which provides number of different possibilities how to write it.

Surname Švejda is said to have two possible different origins - it could come from the word Švéd which means Swede or Swedish, or it could originate from a personal characteristic - švejda meant someone who was big and/or clumsy.

This means the surname could have been written as Schwejda, Schweida, Schwegda, Sswegda, Ssweyda etc. And here are some examples from the parish books and from different time periods: 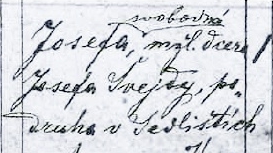 The last example shows declension used in the Czech language - Švejda transforms to Švejdy (as of Švejda's).