It's almost impossible to translate the sentence in the headline. It says "Even the old weaver sometimes weaves a yarn" - but it could be also translated as "Even the old weaver sometimes makes a mistake when weaving" as the word "splete" means both "weaves" and "makes a mistate". And you most probably already know what this post is about - weavers. 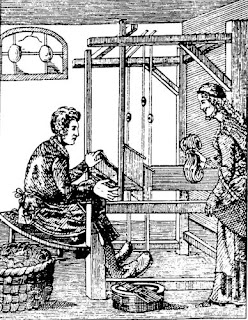 Weaving belongs among one of the oldest crafts - it exists since the beginning of yarn processing, we can find remains or imprints of cloth in the archaeological digs from the Paleolithical era (about 25 thousand years ago). It also became one of those crafts which were wide-spread among our ancestors as small looms were present in almost every household because people made their clothes from home-weaved fabric till the 19th century.

But the demand was rising and there was cloth and fabric needed not only for personal use, but also for the army and for the upper class whose members were not used to do the work themselves anymore. That's why number of people specialised in the weaving and made fabric for sale - they fulfilled orders for the merchants or for the army and made their living thanks to that.

There was quite high number of weavers in Czech towns and villages. Not all the cloth was of the same quality, it depended not only on the material, but also on the skill of the weaver. Some of the weavers were working during the winter only because they were working in agriculture during the rest of the year. These weavers were usually producing lower quality fabrics. Professionals who were making fabric during whole year produced fabric of higher quality. It was, of course, more expensive and not everyone was wealthy enough to buy it.

The looms became more and more automated during the 19th century and the production was moved from the households to the factories. This was one of the causes why the number of weavers was decreasing during the 2nd half of 19th century. Most of the production was done in the factories since the beginning of 20th century and the weaving craft almost disappeared.

Do you like our posts? Consider becoming our patron on Patreon and support us by regular contribution. We offer three tiers with different advantages. See more on Patreon: https://www.patreon.com/czechgenealogy