There are thousands of first names today. But our ancestors used just a few tens of them. They wanted to fit in, not to stand out, because anyone who stood out was usually suspicious. 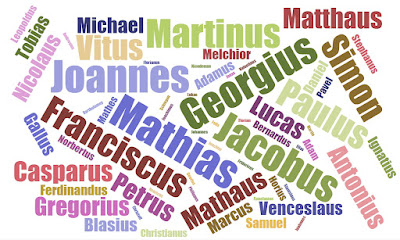 Records in Bohemia, Moravia and Silesia are usually writen in Latin between abt 1730 and 1784. And Latin uses declension and has six cases:

Names ending with -us

Names ending with -as

You can find names such as Lucas or Andreas. The declension is a bit different, only the -s is dropped. For genitive, the ending is -ae, for accusative it's -am.

Be careful when reading the records. The æ is offen written very quickly and it's sometimes hard to say it's there. At least some experience is needed to be sure what belongs there - if a or æ.

This category is much smaller. In fact, I can think of only one name belonging here, Joannes. Maybe I'll find some more in future, but right now there is only this one.

In this case, -es is dropped, genitive ends with -is and accusative with -em.

There are other names which were not mentioned in the list above. Most of them belong to the -us category. Anyway I'll update this post time to time so the names list is better. Hope this helps in your future search in the Latin records. :)

Do you want to support me in writing this blog? Become my Patron on Patreon. You'll get Patron only posts, polls, early access and much more. Click here to read more: https://www.patreon.com/czechgenealogy