September voting about surname topic for October showed you are interested in surnames which were derived from water. So let's take a look on such surnames - and see how many of those we have.

Water is voda in Czech and Wasser in German. I'll use both languages as both were used here in the Czech Republic in the past. 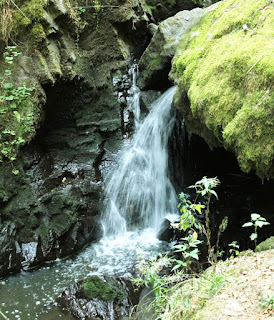 And also Voda is one of the basic "water" surnames. There are some 750 people having both male and female form of this surname - Voda or Vodová. Diminutive from Voda is Vodička or Vodenka.

Vodička (small water) is very common name, about 4500 people have Vodička or Vodičková surname. Vodička was someone living next to a creek or other "small water", or someone who handled water - so this surname was usual for millers.

Vodák or Wassermann (waterman) was someone who was taking care for ponds and creeks, who was responsible for dams and banks of ponds and for availability of drinking water to public. Vodáček was smaller or younger Vodák.

There are other surnames with the root vod-, for example Vodný, Vodice, Vodal and others.

And there are tons of surnames which are not directly derived from water, but are closely connected to it. Rybář is a fisher, Rybný or Porybný is someone who took care for estate ponds and fish. There are tens of surnames derived from fish names - Bolen, Hlavatka, Hrouzek, Ježdík, Kapr, Karas, Lín, Losos, Parma, Piskoř, Plotica, Vokoun, Vranka, Štika..

Do you want to be one of those who decide about the surname post topics? Become my patron on Patreon and vote every month!