Death and burial in Czech past

Two out of three most important events of human life were already described - birth (and baptism) and marriage. It left the third one, death and burial. So - what we know about it? What can be read from the registries? And how our ancestors saw death and burial?
Death was a natural part of life in the past. Today we see it often as something wrong which comes too early, even in case when the dying person is really old. But our ancestors saw the death as it was - coming at its time, part of life, end of the earth-life. And they also saw it as a beginning of something new. They were deeply religional and they believed the heavens (or hell) awaits them after the death.

Our ancestors met death since the beginning of their life. There was huge child mortality in the past and not more than half of children born were strong enough to grow up. Many children died in first few hours, days, weeks or months of life, many people were victims of epidemies which repeatedly broke out because of bad hygiene and living conditions.

The difference when we compare death now and then is also in loneliness. Our ancestors didn't die alone. They were dying in the middle of their families, with their presence, support and help. It was common that a grandma was dying with her grandchildren around her, sometimes quietly, sometimes in pain, but still in the middle of her family.

When a person was dying, he/she had to be provided with the sacraments. There were usually two of them - sacrament of penant and last unction (or anointing of the sick). These sacraments have to be provided to every person which already passed the first communion, usually people from 8 years of age. The sacraments are often mentioned in the registries by the Latin word "providit" (provided by) and name of the priest who provided them.

When the person died, he/she was prepared for the burial which had to take place two days after the death. This term was strictly set because there had to be time for the examination of the body (which was done by the priest or since half of the 19th century by the doctor) and all necessary rituals which were connected to the death and burial.

The dead was dressed into grave-clothes and placed in the open coffin in the house where he lived. The family was sitting with the dead and keeping the watch over him during whole day and night to protect him from evil. The light (candle) had to burn whole time, people were coming and they were placing pictures of the saints into the coffin. This custom was kept till the 2nd half of 20th century. 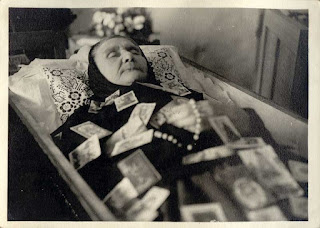 Dead covered by the pictures of saints (1944). Source: Author's archive.

As mentioned, the burial took place two days after the death. People from whole village gathered in the funeral procession and followed the dead on his last route. The mass was held and then the death was placed into the family grave. This part is almost the same today - there was a procession from the church to the cemetery, short speech above the grave and then the burial itself.

Close family was then holding a mourning time which was usually set to six months. During this time there were no weddings and large celebrations allowed in the family, the house was quiet and whole family was wearing something black. But - it often happened that the widower had to marry as there were small children to take care of. He usually married quite quickly, in few months, because he coulnd't handle caring both for children and the family farm. Also young widows married quickly because of the same reason.
By Blanka L. - June 10, 2012