I mentioned in the previous post how to navigate in these oldest land registers. This time I'll describe the system of the measurements used in these documents.

So - it will be a bit complicated. I have to explain the measurements which were used in the past, as well as three different classes of the soil which were used to calculate the tax burden. 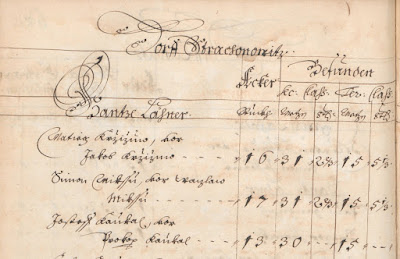 The register contains columns with information about the owners - but we will get to that in the third part of this mini-series. The important part of today are the columns on the right side of the picture above.

There are five columns. The top of the first of those columns shows words Acker and Stuckh. Acker stands for fields, Stuckh means piece - the numbers in the column mean how many plots of fields had the owner of the farm. When we are talking about fields, imagine small pieces of land, not large plots as we know them today. Here is an example of such small plots on a cadastral map from the 1st half of 19th century: 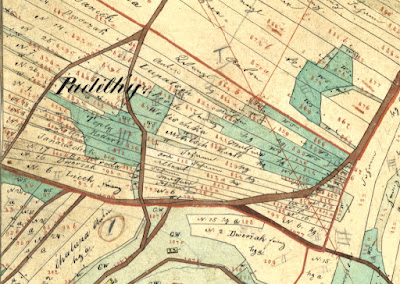 So if there were 16 or 17 plots owned by one farmer, it meant these plots were quite small.

The area of the plots was measured in the old measurement system which was so much complicated. And it's much more complicated when you try to convert it to imperial units. But I'll do my best to explain it.

There were two measurements - Metz (měřice in Czech) and Achtel (osminka in Czech, meaning both in Czech and German 1/8 of the Metz). I'll use the German words as it's easier to stick to one language.

So if we take the first farm as an example:

Let me know if you were able to count how many acres of land your ancestors owned. And don't forget to check the third part of this mini-series which will be dedicated to farm owners and other information you can find in the register.

Don't forget to become my patron on Patreon. It gives me more time to write this blog and provide you more information about Czech genealogy and family history. See more on https://www.patreon.com/czechgenealogy