It's been 54 years since the Warsaw Pact invasion to Czechoslovakia. I was born in 1980 so I didn't live throught these events - but my parents and parents-in-law did. I asked them about those events and here is a story of my mother-in-law. 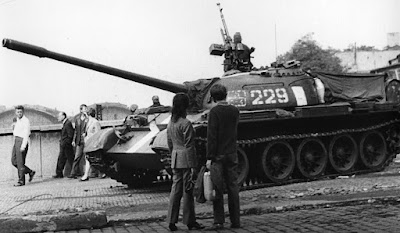 She was born in 1943 and was 25 in August 1968. My parents-in-law were already married and were living in Roztoky, 20 minutes by train to the Prague center. She was expecting her second child and was working in the telecommunication services in Prague.

We were both working in Prague, I had a night shift from 20th to 21st August 1968 in Československý rozhlas (Czechoslovak Radio),  Czech public radio broadcaster. I was working in the radio headquarters that night and we got an order to shut down the lines. We twisted off the light bulbs, which were showing which line is running, so it seemed from the outside the lines are off.

It took them (the Soviet army) long time before they found us even the fact there was huge antenna on the building - everyone knew where the headquarters were but no one was willing to help the Soviet soldier to find it. 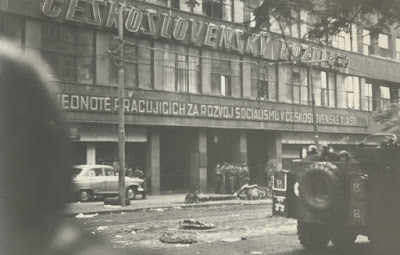 When the (Czechoslovak) police came to our work we thought in the beginning that it's some kind of exercises. Then we decided to secretly listen to the radio broadcasting, we heard the news and we then decided to cover that the lines are still up and running.

We left our workplaces in the morning of 21st August and left Prague with the last train which was going in Roztoky direction. The trains going through Prague were then stopped and it was impossible to get out of Prague by the public transportation.

When we were walking to the train station we heard shooting, we saw tanks in from of the building of the Central Committee of the Communist Party of Czechoslovakia, we saw cars with the machine guns... We had to cross the bridge next to that building, all tanks had high revving motors which was scaring us. 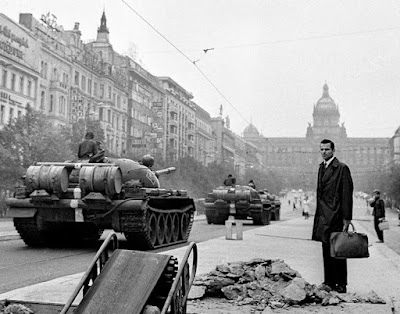 We heard number of rumours from our colleagues in the next days - we didn't go to work and were lucky enough to leave it before the soldiers came. Some of our colleagues were threatened to be shot by the soldiers but they were still trying to keep the radio running.

It took several days before the Soviet army was able to shut the radio broadcasting completely down. There was a clash between the Warsaw Pact soldiers and people of Prague who were trying to protect the Czechoslovak Radio. It happened on 21st August and the Soviets thought they were able to turn off the broadcasting. But the Czechoslovak Radio was placed in number of buildings around Prague so it was possible to maintain the broadcasting and to inform people about the current events without propaganda.

But the broadcasting stopped after the Czechoslovak government was forced to agree with the invasion... My parents-in-law returned to their work in telecommunicaions but they were considered as unreliable because of their religious believes so after moving out of Prague they were working on other positions.

If you like our blog, please consider supporting us by becoming our patron on Patreon. You'll get early access to our posts, chance to vote about next month posts, extra posts for patrons only and much more. See more on https://www.patreon.com/czechgenealogy.