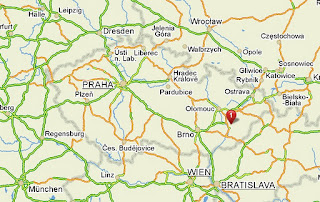 Location of Žeranovice in the Czech Republic (Source: Mapy.cz)
First written mention about the villages is dated by the year 1297. It's said on the official website of the village that there should be an older mention from the first half of 12th century, but I haven't found this information elsewhere. The name Žeranovice originates from the first name Žiran with suffix -ovice which means "someone's village" or "village owned by someone", in this case by a man called Žiran.

The patron of the village is Saint Lawrence of Rome, to whom is sacred local church. His attribute is a gridiron, on which he was burned to death. Gridiron is also a part of the village coat of arms, together with a lion, which belonged to the Seilerns, who owned the villaged from 18th century. 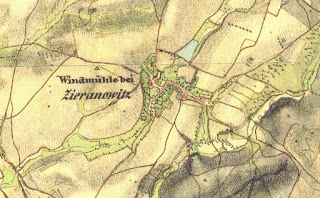 Žeranovice on map from 2nd military mapping (Source: Mapy.cz)
The village was owned by a large number of different owners, more or less important noble families from Czech lands. We find Šternberk family, Rožmitál family and many others among the owners. The village belonged to the Količín domain in the middle ages, but later there was created a new domain called Žeranovice domain.
30 years war and the Battle of Bila Hora brought large changes to the domain. Previous owner, Kryštof Ulštorfar from Němčí, was an evangelical and joined the wrong side during the uprising against the king. This was the reason why the Žeranovice domain was confiscated and later sold to one of the noble men who were loyal to the king. 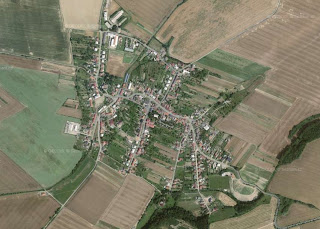 Aerial view of the village (Source: Mapy.cz)
The domain was later bought by the family of Seilerns who held it until the year 1924 when domain were cancelled. This family brought many good things to the village, one of them was reconstruction of a small chateau in the centre of the village. This chateau was a centre of the domain, there were outbuildings all around it and whole life, both social and economic, was directed from this place.
Here is information from the censuses about the number of inhabitants and houses during the years:
Source: Statistic book called "Historický lexikon obcí České republiky" (Historical lexicon of the Czech Republic villages) 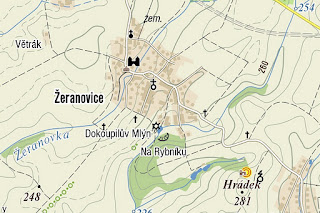