Čeladná belongs to the Moravian-Silesian Region, district Frýdek-Místek. You can find it ca. 3 kilometers south from Frýdlant nad Ostravicí. Čeladná is quite a long village, it has more than 10 kilometers as it lies along the stream bank of Čeladenka from the north to the south. The part of the village closer to the spring is called Horní (Upper) Čeladná, the more distant part is called Dolní (Lower) Čeladná. 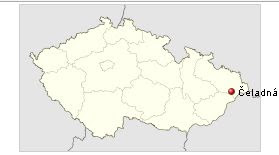 
On the coat of arms you can see a silver sheep (referring to the old sealer and also Wallachians) placed on a green cone (referring to the Hukvaldy domain and also to archiepiscopate Olomouc that has green cones in its original shield; it also represents a mountains where Čeladná lies) and finally two green stars, referring to the patron of Čeladná, St. John Nepomucene.

History
The oldest monument in the Čeladná area is a ruin of gate castle from the end of 13th century. It was built on the hill Kozinec, ca. 5 kilometers south or south-east from the center of Čeladná. Today, there are noticeable only terrain outlines (only 5-7m width and 50m length on a hill spine) and a 3m deep moat in the rock. In the past there were situated houses, on the largest rock above a river an observatory and on the both main hillocks two watchtowers. The castle had both wooden and stone construction. During archaelogical reschearch there were found mostly potsherds and fragments of iron tools dated to the 14th and 15th century.

The supposed purpose of a castle built on a such inaccessible location is a guard of an ancient trade channel from Moravia to Hungary.

The first written note about Čeladná is in land registry of Hukvaldy domain from 1581. The origin of village name is unknown. A common interpretation is that it comes from the word "čeládka" (menials), but recently Mr. Tofel published a theory from the old German word for a place of toll collection in a mountain pass.

The Hukvaldy domain was the first one on the Moravian-Silesian-Slovak border inhabited after 1480 by immigrants from Wallachia. It is very possible that also in Čeladná were newcommers mingled with original settlers. Wallachians were welcomed by the domains owners, because they settled mountains and therefore defend the borders. They were strong and healthy, they bred sheep and made their traditional sheep milk products.

In the second half of 17th century the living conditions got worse. Subsequent rebellion was suppressed and many people ran away to hills, where they became bandits. As a help with them (and also with guarding of mountain-passes) there were formed a special units of "gatekeepers" (the Czech term is portáš from Latin porta meaning gate). This East-Moravian special guard force was formed in 1638 and dismissed 1830. In Čeladná it had a station with ten men.

Ironworks were founded here in 17th century, but it had to be stopped because of the safety reasons (it was forbidden to clear forests along the borders because of a risk of Hungarian raids). The production was restored in the end of 18th century, but all that reminds it is a symbolical cross from 1847.

Manufacturer J. V. Schabenský built a weaving factory in former mill in 1880. It gave work to more than 100 workers at once till 1951.

The parish church of St. John Nepomucene was built in 1784, a simple late baroque bulding furnished with the equipment of defunct churches (mostly from Franciscian monastery in Kroměříž). Two years later first school was founded. Later, there were built more schools in other parts of Čeladná area.
The first train went through Čeladná on 1st June 1889, but it has not stopped, because a local train station was founded in 1906.

Jan May founded here a spa and a sanatorium for miners from Ostrava in the beginning of 20th century. It still works as a physiotherapeutic center. There is a legend of revelation of Virgin Mary next to the nearby spring and in 1893 as a thank for his recovery, Ferdinand Brázda built close to the spring a small chapel of Virgin Mary.

Another chapel of Sts. Cyril and Methodius can be foundd close to the road towards Podolánky. The chapel is small and wooden, built in 1936 in a manner of buildings by Dušan Jurkovič. Nearby pavillon is built upon the spring Cyrilka.

During World War I and after it, a life in Čeladná was for most of the inhabitants very tough, in 1929-1937 with high unemployment rates. This got better during World War II, but for questionable price.

To these days there are many memorials and monuments of local partisan groups. After WWII, Čeladná became a new home for women and children from Lidice.

Today, prosperity of Čeladná increases with spa and related services.


Genealogical information
Čeladná belongs under Land Archive, Opava. First entries were made by the parish Místek (BMD 1628-1692), then there are none till 1771. After this year, Čeladná has its own parish.
The parish books available online are: births till 1898; marriages till 1935 (with index till 1949); deaths till 1883.