Once upon a time there was an Empress (or more precisely a Queen) who ruled in the Central Europe. Her name was Marie Terezie (Maria Theresia) and she reigned in 1740-1780. She was very wise and made many changes in her empire. One of those changes was based on an act from February of 1770. This act set a frame for new system of house numbering in whole Cisleithania. As Bohemia, Moravia and Silesia belonged under this part of Habsburg monarchy, it also affected every settlement in this region.

Prior to the house numbering took place houses in the villages were often named by their owners, purpose and so on. This is where the surnames after the roof came from as described in one of the previous posts.
Based on the act from February 1770 houses in every village and every town received a house number in timespan between Autumn of 1770 and Autumn of 1771. How these numbers were given to the houses? There were two basic types of numbering, all derived from the imperial committees which did the house numbering. 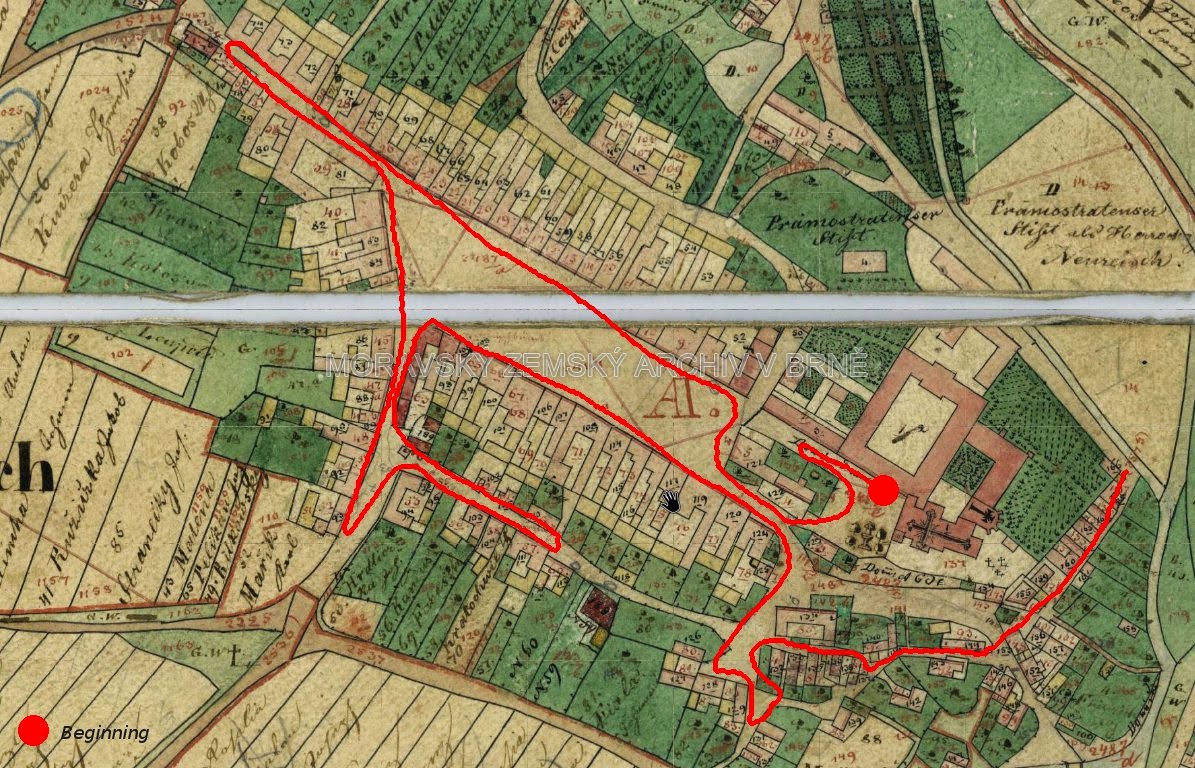 Where the imperial committee entered the village
As I have written in previous blog post, there were three basic types of Czech rural settlement - linear, nucleated and dispersed. Each imperial committee had its route planned and often the numbering depended on the fact where the committee entered the village - they started the numbering there, continued on one side of the road to the end of the village and then back to the starting point.

Cibotín in Havlíčkův Brod district is a perfect example. I'll use it later too to explain changes in house numbering. Imperial committee entered the village in its west part, from Česká Bělá town. They started from the first house on the right side of the road, continued to the end of the village (which was a bit separated from the rest of the village) and then back to its west end.

New houses after the house numbering in 1770-1771
What happened when there was new house built in the village? It received the lowest available number and it didn't matter where in the village is was built. There were many new houses built in almost every village in Bohemia, Moravia and Silesia and that's why it's sometimes hard to tell which type of numbering was used.

It was also the case of those houses which were divided into two house numbers. This happens until these days and Nová Lhota in Hodonín district is quite a good example: 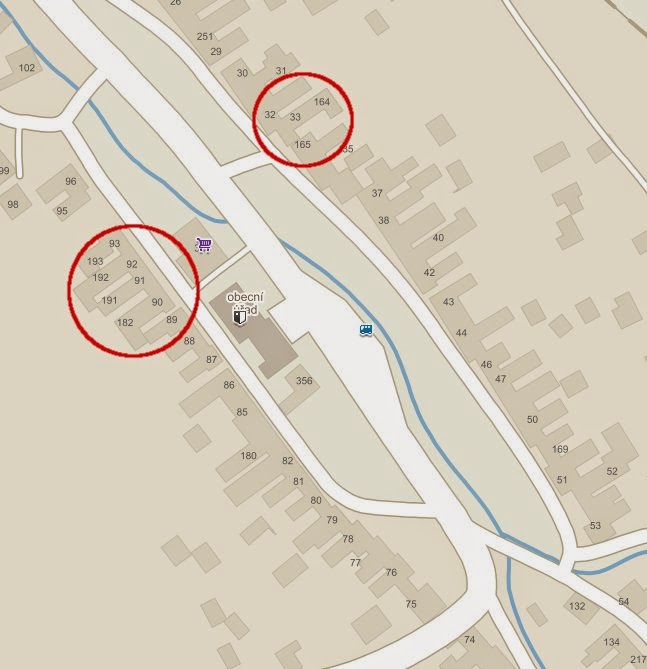 Another case was giving old house number to the new house built on some other place in the village. Cibotín can be quite good example. House number 7 was originally located in the western part of the village. But today it's in its eastern part. Original house was demolished and its number received one new house. 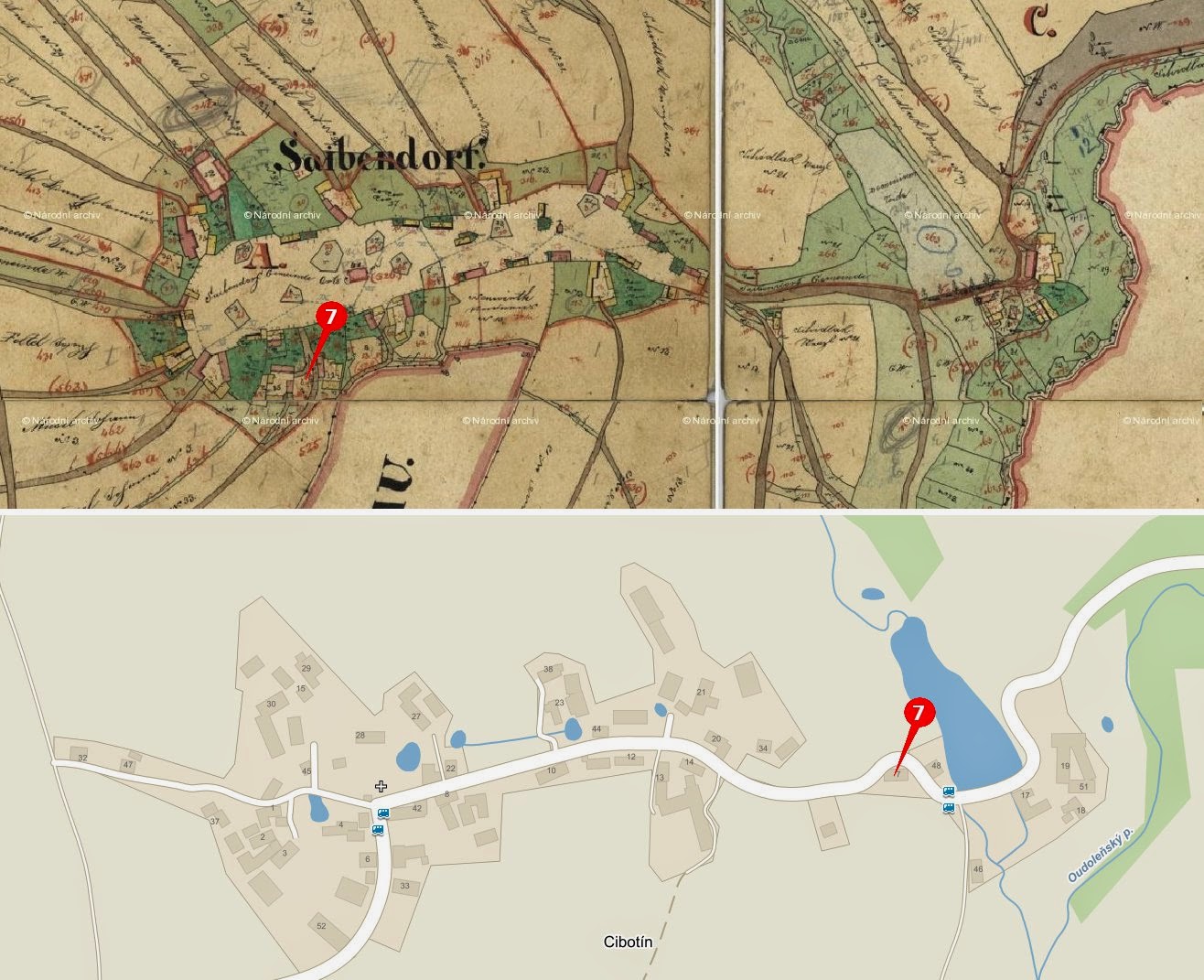 Re-numbering of villages
There are some villages and towns which were re-numbered as the mess in the house numbering was too huge. Or when another village was connected to the previous one and it was necessary to unify the house numbering. Fortunately there are not too many cases of such re-numbering, but if you bump into one, it's often marked in the parish books where old and new house numbering is mentioned. I will try to find an example and place it here, but right now I don't have such example available.

I hope this made house numbering rules in Bohemia, Moravia and Silesia a bit more clear. Let me know if there is anything unclear!