Protestants in Bohemia and Moravia after 1781

When Patent of Toleration was issued by Emperor Josef II. in 1781, about 80 thousands of people living in Bohemia and Moravia decided to change the church in next few years - it was just 2 percent of Czech population. The recatholization had its impact when comparing the numbers before Thirty years war and after 1781. This blog post focuses on years 1781 to 1918.

Most locations where people declared themselves to belong to Helvetic (Calvinists) or Augsburg (Lutherans) church were in regions far away from the main centers as Prague or Brno. These places were usually somewhere in mountains - Vysočina region and Beskydy region were two regions where most people joined the Protestant churches. Reason was clear - as these places were far away, it was harder to control people's faith there and it was easier for people to gather for secret evangelical masses even before the Patent of Tolerance.

Other location where many people joined one of the "new" churches was central Bohemia, around Kolín and Kutná Hora. I have to say I don't know why exactly this region became Protestant again when it was near the government - some of my own ancestors from this area were also Protestants but I was never looking for explanation. Maybe it's time to find one.

Below is a map of villages or towns where Czech Protestant parishes were created. As you can see, most of them are in Vysočina region (central part of the Czech Republic) and then in Beskydy region (far eastern part). Then there is this surrounding of Prague (Mělník, Kolín and Kutná Hora districts) where there are also many of the parishes. 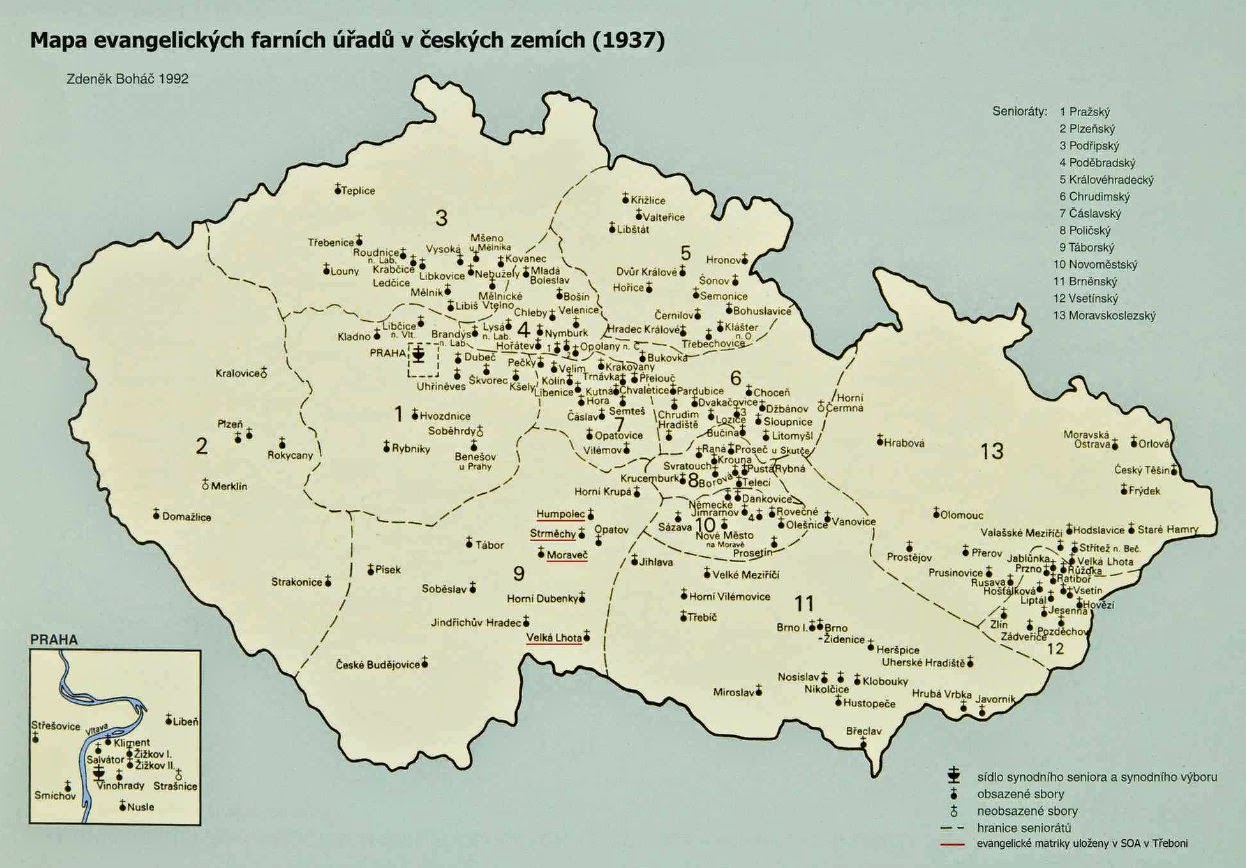 There were two official Protestant churches allowed - Helvetic and Augsburg. Helvetic church was based on Calvinists religion and Augsburg church on Lutherans religion. But most people who declared themselves to be both Helvetic and Augsburg didn't in fact know the difference between these two religions. They had their own faith which was based on Chalice church or Czech Brothers church. But these two churches were not allowed - and it's most probably one of the reasons why so few people left Catholic church.

Most people joined two new churches between 1781 and 1790. The authorities were often shocked by the numbers of people leaving Catholic church - they were not prepared to the fact that there were so many people willing to join on of the Protestant churches. In some cases whole village became Protestant - as in case of Velká Lhota, Brandlín, Šach or Radlice near Dačice in Vysočina region.

This fact led to a more complex way how to leave Catholic church - it was originally enough to come to a comittee, answer its questions and ta-dah, one became Protestant. But it was much more complicated after 1787 - the person who wanted to leave Catholic church was forced to visit a six-weeks training with Catholic priest(!) whose task was easy - persuade the person he or she in fact doesn't want to leave the church. This was again one of the reasons why the numbers remained low.

The Protestants were not equal with Catholics - they were not allowed to join some of the professions (such as teachers in other than protestant schools, clerks, higher ranked soldiers), if a Protestant wanted to mary a Catholic, he had to declare the children will be raised in the Catholic church and so on.

Protestants also had to pay their priests and teachers (Catholic priests and teachers were partially paid by the state), when they wanted to build a church it wasn't allowed to have a tower and bells. And more - they had to pay fees and taxes to the Catholic priests as well. One of the reasons was the fact that all Protestant births, marriages and deaths had to be written in the Catholic registries too till 1848 as the Protestant registries were not accepted as official documents.

The equality was based on a law from 1861 - so eighty years after the Patent of Tolerance. There were still only two Protestant churches allowed and this changed after the creation of Czechoslovakia in 1918.
By Blanka L. - January 10, 2015