It's available in Czech, English and German which makes the search there much easier for those who don't speak Czech. This lexicon contains all villages and towns in northern and north-western Bohemia - that area which is in scope of State Regional Archives in Litoměřice.

It is very very helpful for the research in this area. Most of the places there had both Czech and German names - and parish books are mainly in German so you find only the German version of the village name there. This lexicon becomes handy in such cases - and as many people from these areas moved overseas, many readers of this blog have ancestors there.

Lexicon contains not only both version of the municipality name, but also additional information about districts (both political and court district in 1930), about domain to which the town or village belonged (just before the large administrative change in 1848), also about parish... There are notes added to some of the villages, such as "zlikvidována" (liquidation) or "další název" (another name) etc. 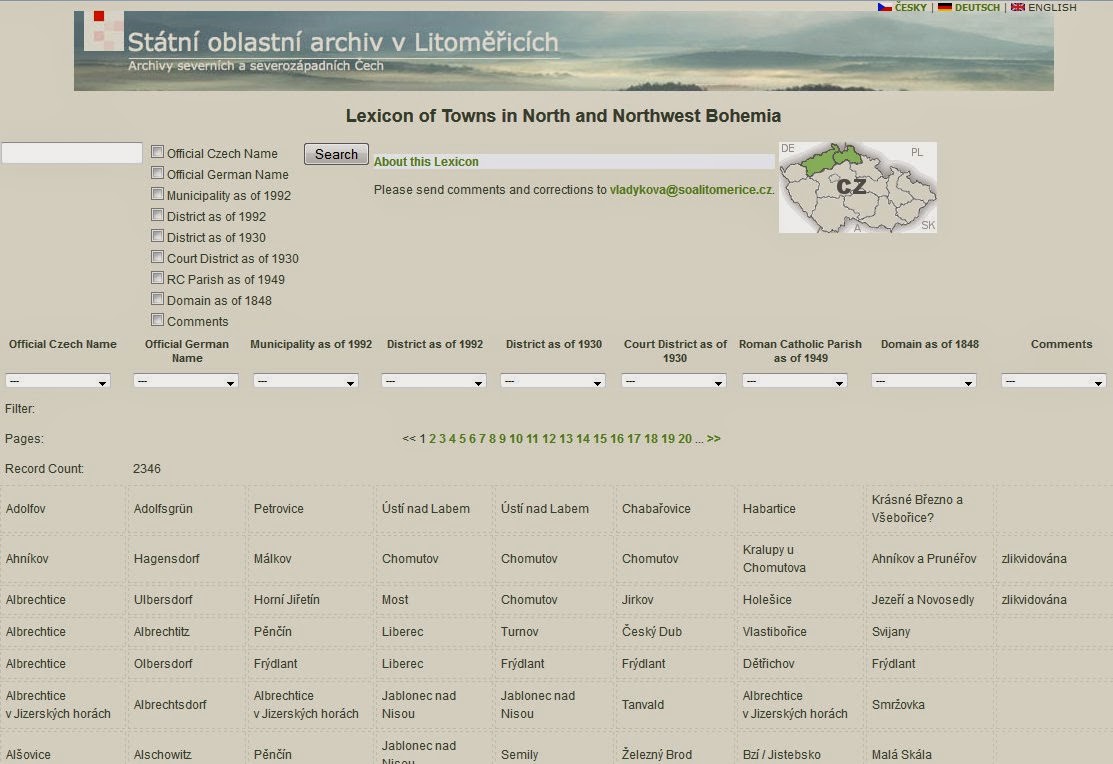 Screenshot of the lexicon

I mentioned Rašovice in the title of this blog post - and this village is quite a good example. It had two very similar names so it's not hard to find it on a historical map:

Current and historical map of Rašovice, both from Mapy.cz

The village is written as Raschwitz or Raschowitz in old records (prior to 1918), because it was located in the Sudetenland, ie. area inhabitat mainly by Germans. This case is easy because the names are almost the same in Czech and German (sch in German is read the same way as š in Czech, tz is read as c).

But there are many villages which have Czech and German names totally different. Here are some examples: Kuřivody - Hühnerwasser (but in fact, Hühn means kuře (chicken) and wasser voda (water)), Horní Sedlo - Pass, Ostré - Neuland, Pertoltice - Neu Berzdorf, Valy - Schanzendorf. It's easier to check the lexicon than to try to locate the village on the map.

Email ThisBlogThis!Share to TwitterShare to FacebookShare to Pinterest
Labels: language