There are two types of scripts used in Czech registries. Older one is humanistic cursive which is related to our writing, newer one is kurrent (or neo-gothic cursive) which has different lines and draws.


If you read our blog regularly, consider becoming our patron on Patreon. We are publishing extra posts for patron only there, you can vote in our polls for next month topics and much more. See more on https://www.patreon.com/czechgenealogy
Humanistic cursive was used in Latin records (whole time) and in Czech records since the 2nd half of 19th century. This script is based on Latin script and is very near to the handwriting scripts we are using today. It is easier to read and we are able to handle it more or less without problems.

Neo-gothic cursive, also called kurrent, is different script. It has it's origin at the end of medieval ages. It is used in Czech documents since beginning of 16th century and it was used for Czech and German records. The lines of this script are bit different from the humanistic cursive and therefor are harder to read because the lines of the script are not natural for us.

It is recommended to try to write in the kurrent script to learn how the lines of the letter were going. Thanks to it you'll be able to choose the correct letter, because sometimes the letters looks one like another. Here is a table of this script (click for higher resolution): 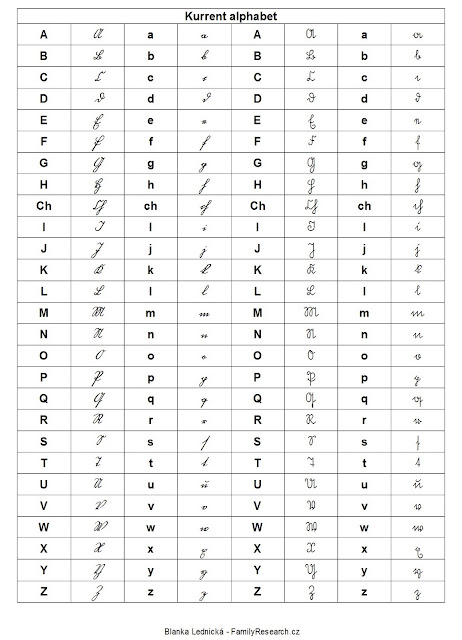 This table is composed by calligraphic form of the letters. You must take into account that not all vicars and their cooperators used the calligraphic form. The writing was also changing, one person uses another style in 25 years and another in 60 years of age. It needs lots of training to be able to read in the registries.