Theme for every week: Isn't this the carpenter's son?

Occupation - what else can be meant by the title? :o) Do you have a teacher among your Bohemian or Moravian ancestors? If so, I wish you good luck in search... As I haven't received any e-mails for this weekly theme, I have decided to take a story from my husband's family.
There are two teachers in my husband's Moník line from Eastern Bohemia - Jan Moník, who married Františka, daughter of Bedřich (Fridrich) Bergmann. Those two in bold were teachers. Teacher's life wasn't too easy in 18th and 19th century. They were paid by the number of children who visited the school - and they weren't paid too regularly. Their life was miserable quite often, they didn't have enough money, anything to eat. They had to be very enthusiastic about their work to be able to overcome these difficulties... 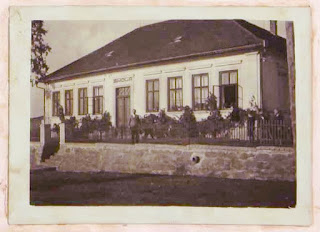 Czech school building (Hrejkovice chronicles, SOkA Písek)
And based on this they belonged among those people who were moving a lot because they needed to find a better place for themselves and their families. That's why tracing a teacher's family is quite hard if the only thing you have available are parish books. It's not mentioned there where they lived (and worked) before they moved into the village in which you found them. There is no single source for all teachers in the Austrian Empire.
Jan Moník - I didn't have too much information about him in the beginning. I had his son, Václav Moník, who married Julie Holíková from Ivančice (Moravia) in 1872 in Vlkov (Eastern Bohemia). He is mentioned to be a son on Jan Moník, teacher in Vlkov, and his wife Františka, daughter of Bedřich Bergman, teacher in Kostelní Lhota. He was 23 yeards old, therefor he was born around 1849. But where?
Honestly, I have no idea until today, because I wasn't able to find his birth place yet.
I was able to find one his sibling, brother František, born in 1862 in Vlkov. And I found out he had a sister Klotylda, who had illegitimate child in 1872 also in Vlkov. Jan Moník was a teacher in this village until his death in 1887. But where was he teaching before Vlkov?
There are series of books available in Kramerius, digital library of Czech National Library in Prague. These books are called Školník and Věstník, are about teachers and they cover the area of Hradec Králové episcopate where both Jan Moník and Bedřich Bergmann was working. Thanks to these books I was able to locate Jan Moník from 1854 to 1861 in village called Starý Ples, which is not far away from military town Josefov. Starý Ples belongs under Jasenná parish (Zámrsk archives) and I plan to search these registries soon.
Bedřich (or Fridrich) Bergmann was married in Habřina with Kateřina Karlová in 1810, local farmer's daughter. He was a teacher in Habřina when he got married but the family moved soon to Libřice, where their eight children were born (last one, son Jan who also became a teacher, in 1825). Bedřich moved to Kostelní Lhota later on and died there in 1856. I found out he was born in Kuks thanks to a small note in one of the books.
People didn't move too much in the past, 15 km (9,5 miles) was a huge distance for them. But teachers were different. I have prepared a map so you can see how far they were able (or had to) move (there is a measure bar in the left bottom corner of the map - 12 km in about 7,5 miles)...