Theme for every week: Heart of Europe

Legends say that Prague was founded in early medieval era, during a reign of legendary princess Libuše. She was a prophet and one of her prophecies was: I see a vast city, whose glory will touch the stars! I see a place in the middle of a forest where a steep cliff rises above the Vltava River. There is a man, who is chiselling the threshold (prah) for the house. A castle named Prague (Praha) will be built there. Just as the princes and the dukes stoop in front of a threshold, they will bow to the castle and to the city around it. It will be honoured, favoured with great repute, and praise will be bestowed upon it by the entire world. (cited from Wikipedia) 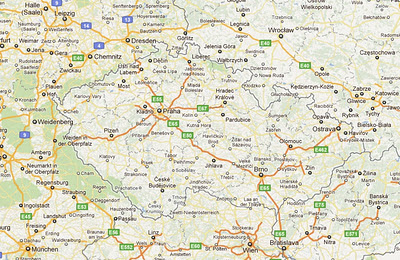 Location of Prague in the Czech Republic. Source: maps.googe.com
Originally it was just one of the more or less important settlements but it soon raised into the residence of the reigning family. Prague became the most important town in the area based on this fact. The number of inhabitants raised and many people were moving into the city. It still lasts - people are coming to Prague  from the country because of work and sometimes return back to the country in their later years.
That's one of the reasons why genealogical research in Prague is quite complicated. Just few people are originally Prague inhabitants, just few families have their roots in Prague itself. If you have a person born in Prague, it's very probable that her/his parents were born somewhere else. It's not so hard to find during the 19th century, but research is quite complicated in 18th or 17th century.
When we say Prague today, we see a Greater Prague which was created in 1922 when a large number of surrounding villages was connected to the original inner town. Inner town consisted of two parts, Prague I - Old Town, Prague II - New Town, Prague III - Lesser Town, Prague IV - Hradčany (castle part), Prague V - Josefov, Prague VI - Vyšehrad.
Greater Prague consisted of a number of smaller or larger villages which were near to the original centre. Wikipedia again has great map of the division of Inner Town (black), Greater Prague (dark grey) and the new parts which were connected after WW2 (light grey). Wikipedia map of the Prague parts
Prague city archives already has some of the registries online, mainly from the Inner Town and indices from the surrounding area. Unfortunately large part of the website is in Czech and I haven't prepared the guide yet (so it's the goal for next week) so the search is a bit complicated.
What helps a lot are Prague residential registration lists which are stored in the National Archives in Prague. NA made this collection available online. It covers years 1850 to 1914 and the original area of the Inner Town and part of the Greater Prague.
If you find your ancestor in the registrations, you can determine which part of Prague he was from. There is a house number mentioned on the registration list, you just have to know which number it is. I have taken few registrations as an example.
First example shows quite non-complicated situation. The family lived in house no. 353/II, ie. house no. 353 in Prague II, New Town. There is a huge help in form of PDF file which contains information about the parish competency for the different house numbers. This file helps us to find the correct parish for the house number.  Other examples show more complicated situations where family moved several times, sometimes from one town quarter to another. The third document shows Sm. at the top of the house numbers - this means Smíchov.

If there is Roman number, it's quite easy to find which part of Prague it was. Here is a list of Prague parts based on the Greater Prague division from 1922:


And there are other files helping us orientate ourselves in the Prague parishes on the Prague city archives website.
By Blanka L. - October 30, 2011