Veselí nad Moravou, since 1950 consolidated with village Milokošť and 1954 with Zarazice, is a town with 11 748 inhabitants. You can find it in South Moravian Region, in Hodonín district. "Nad Moravou" means upon a river Morava, that flows on the western side of town, accompanied with Baťa Canal. The altitude of Veselí is 176 meters. 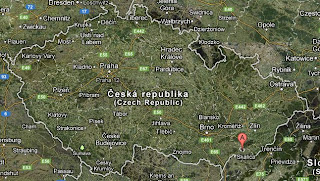 The name Veselí means "joyance" or "glee", but because of the most possible origin of naming this certain place Veselí, it can mean also "spree" - it is said, that in old times, there was a wayside inn close to the crossing of a trade route Hungary-Moravia and a river Moravia, and Veselí (or Veselé, in local dialect) was its name. We know a few versions of the name Veselí: Wessele, Weseli, Wessely, and from 1437 on also a German form Wessels. The phrase "nad Moravou" was added in 1883 to distinguish this town from another homonymic towns.

First written mention about Veselí nad Moravou is in the document issued 26th August 1261 in Olomouc, where is among the witnesses mentioned Sudomirus de Wessele. But the predicate "from Veselí" Sudomír used earlier, on his seal appendant to a document issued in Opava 18th July 1256.

Sudomír was a founder of a castle in Veselí and very probably also of castles in Uherský Ostroh and Strážnice (here with his brother Pardus). The reason to build three neighbouring castles was to guard and defend the borderline between Moravia and Hungary. He supposedly founded a nearby village Sudoměřice (named after him) and Rohatec. The same brothers are mentioned also by foundation of the town Uherské Hradiště in 1257. By these activities, the protection of Moravia was considered reinforced. As following history shows, not very successfully, because in 1314, the castle of Veselí was captured by Hungarian magnate Matouš Čák.
After rescuing the town by Czech king Jan Lucemburský in 1315 we have no mentions about Veselí till the year 1363, when it was already owned by noble family of Šternberks. They owned the domain for hundred years and then the owners quickly changed, including a short conquest by Hungarian Matyáš Korvín in 1469/1470.
The last owner of Veselí was Friedrich, Count Chorinský, whose youngest child, Maria Anna, is still alive.

The town itself was formed in 1919 from three parts: first known is Předměstí (Suburb), on the left side of the river Morava, primarily a fishing village encircling the former parochial church of St. Barholomew, cemetery and parish; second (Civitas) was purposedly founded as a market settlement on the crossroads and this was the town itself, with a castle; third part was a Jewish Quarter, eastwards from the castle, with jewish cemetery founded in 1784.

The modern epoch of Veselí starts in 1879 by first light railway, used mainly for business, but also for connection Wien-Krakow. The economic development of Veselí begins with the railway line Brno-Trenčanská Teplá (Slovakia) and other cross-border railway lines. A former watermill was transformed into a power station and there were built new factories: furniture and shoe industry and in 1961 the largest concern in the area - Železárny (metalworks). All this industries are still main economical activities of Veselí and they also were a reason of building 4 large prefabricated housing estates, together for more than 5 500 people.

Here is information from the censuses about the number of inhabitants and houses during the years:


Genealogical information
Veselí nad Moravou belongs under Moravian Land Archives.
The parish books available online are from 1669 till 1906 for births and marriages and till 1932 for deaths.
In National Archives in Prague there are also registers for former Jewish Quarter. In collection Matriky židovských náboženských obcí v českých krajích under inventory numbers 2335, 2336, 2337, 2338 there are births 1785-1853, marriages 1830-1840 and deaths 1832-1846.

Here you can see a quite interesting report from the vernissage of an exposition of old photographs from two streets in Veselí. The speaking man is a local historian and artist Vladimír Groš, who collects old photographs and memories of Veselí and its surroundings, mainly by direct contact with local families.
By Gehenna - September 24, 2012