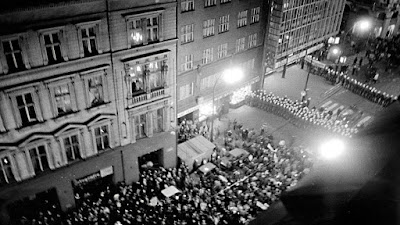 The first protests took place in January 1989 during the Jan Palach's week. It was a set of protests held in the Wenceslaus Square in Prague for five days, first sign that the communist regime has problems not only in Poland or Germany, but also in Czechoslovakia.

But the main reasons everything went crazy (from the regime point of view) was the students' march through Prague on Nov 17, 1989. It was originally a commemoration of 50 years anniversary of the Nazi closure of the Czech universities in 1989. There were your 500 or 600 attendees of the march in the beginning but the numbers grew quickly up to 15 thousand people.

The march went to Vyšehrad where the commemoration act oficially ended. But some 5 thousand people decided to continue to the Wenceslaus Square. The regime didn't want to allow this, so the police stopped the students on Národní třída (National street). The clashes between the police and the students and a false information about one dead student led to huge protests all around Czechoslovakia - and fall of the communist regime.

I was just 9 years old when the November protests began. I don't remember much of it. My parents weren't active (they had two children and probably were afraid how it all will end), so we didn't join those huge protests in Letná in Prague. 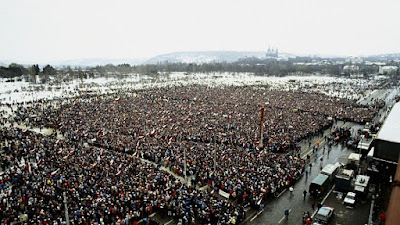 I have just one memory directly connected to the events of November 1989 - standing in the school dining-hall queue when some of the older pupils wore tricolors pinned to their sweaters and jackets.

We are celebrating 30 years of freedom this year. And there are again huge protests against the government, against both the prime minister and the president... Let's hope we are able to protect the freedom won in 1989. 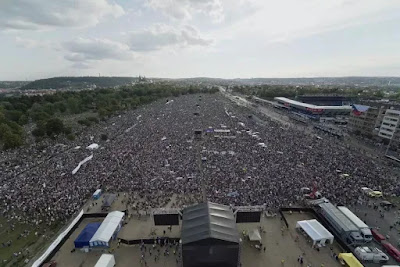