People in the parish books: Midwives

I wrote a post about priests - but those are not the only people mentioned in the parish books. Another "unimportant" name you can find there is a midwife's name. 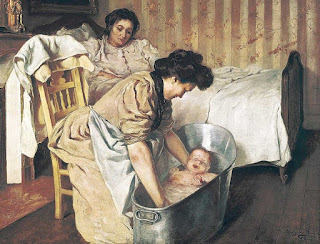 Midwives started to be mentioned in parish books after 1780 and later they were distinguished as certified and non-certified. Certified midwives had to complete a university course and have certain qualities - but it doesn't necessarily mean they were preferred by families or that uncertified midwives provided much worse care.

German term form midwife is Hebamme, Latin obstetrix, Czech (porodní) bába (or it may be used as a verb "babila", that simply means that she assisted during birth). Sometimes there is "žádná" or "keine" - none. (Like here)

Midwife's name might be jammed somewhere into the previously blank place in a record and therefore the information about her might interfere with information about a family. Particularly info about the village and house number she was from might end up at the end of the father "box" of the record and look like it is actually about the grandmother.
Or you can see that there are two house numbers in the house number column and the second one on the level of midwife name is her house number.

Midwife can also occur in the place designed for priest and that's because they were allowed to baptize a child in emergency:
a) inside mother's body, if the labour went badly and there was a risk of death (or certainity, esp. in case of transverse position of the baby - that would be later removed in pieces after being torn apart by midwife or physician/surgeon). Such children were baptized on visible part of their body and there was a formulation for this particular kind of baptism (“In case you are able to receive the baptism, I baptize thee in the name of the father, and the son, and the holy spirit, amen.”).
b) outside mother's body, if the child was premature, weak, obviously severely handicapped (or malformed, like conjoined twins) or harmed during the birth itself. There were, though, serious discussions in past about how early during the pregnancy (or how malformed) can be a child to be considered to be of human nature.

Sometimes when the child survived against expectations a priest might perform another "baptism", not only to be done properly but also to allow the child to have godparents who were very important people in their lives.

Similarly to priests, information about midwives is useful only in case she belongs to your family - in one case this occupation allowed me to trace where the family lived during the years of their marriage.
By Blanka L. - November 30, 2019